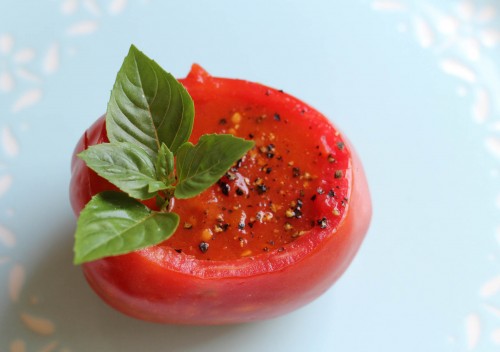 The days grow shorter and my tomatoes grow bigger. And bigger.  Because I’m growing a monster roma type tomato, whose seeds were given to me by my friend, Alice, and I swear, they are big enough to be soup bowls. Hey! Let’s make tomato soup and serve it in a tomato bowl!!! 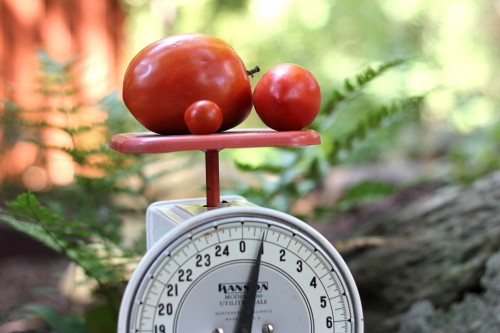 If you look at this not-recipe, you’ll think it’s fussy, but you can get lots of other stuff done while you’re cooking. For example, it’s summer … make this while you peel and put by fresh tomatoes from your garden or local market. And corn … since I can’t control the raccoons in my garden any more than I do anything else, I buy lots of fresh organic corn from the local tailgate market. Whenever I cut the corn from the cob, to make a chow-chow or freeze, I save the cobs and freeze them in a bag so I can throw into the soup pot come winter. Americans have been corn-cob brothing for 200 years, more or less. Same goes for English peas, by the way, boil your pea-pods for extra flavor. Vegetarians take note! (See the 19th century recipe below for “Succotash.”)

Ok, let’s make soup. First slice an onion very thinly and sprinkle lightly with salt. Set aside and let the onion release its juices for a minute. Meanwhile, throw a bunch of garden tomatoes of any variety into boiling water for about a minute and slip off their skins. Remove and compost the core, squish the tomatoes good with your hands, and don’t get rid of the seeds. 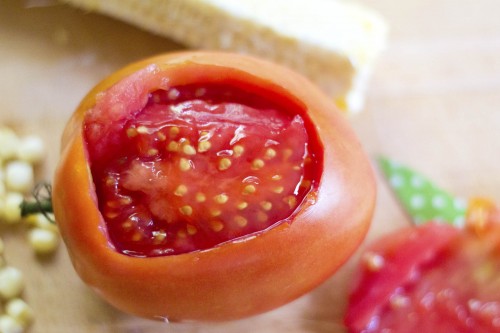 The gunky stuff around the seeds is loaded with tomatoey-flavor. Include the seeds in your soup. Now, caramelize the onions in a heavy saucepan in a drizzle of olive oil and a little piece of butter. For a long time, like 45 minutes, on low heat. Stop whining. Stir constantly at the end so the sweet darlings don’t burn. 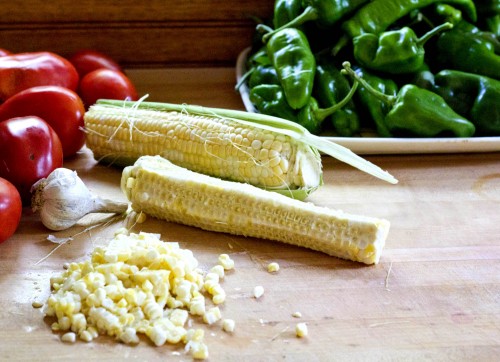 While the onions are cooking, cut the kernals off of an excellent ear of corn and break the cob in half. Cover the cob with water and simmer for about 30 minutes. By the time your corn cob broth is done, your onions are done. Add a couple of chopped garlic cloves to the onions and soften. 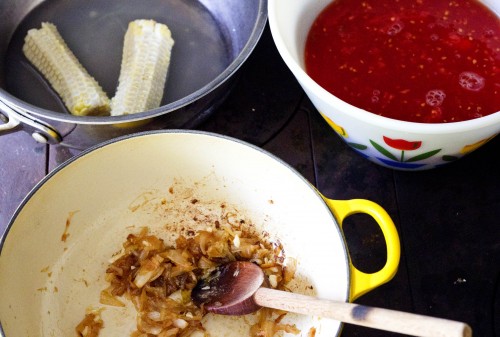 Now, add the corn broth (you should have about a cup) to the onions and then add your tomatoes, which you have squished with your hands or, if you must, a food processor. Your tomato pieces have to be as big as your onions or your soup will be creepy. Simmer your soup, until it tastes the way you like it. Depending on how juicy your tomatoes are, you may need to thicken the soup with a couple teaspoons of flour very lightly browned in equal amounts of butter. Add the corn to the soup if you like, or use it for some other part of your meal. Season the soup with salt and your  best fresh-ground pepper. A hint of ancho pepper and smoked paprika adds intrigue. 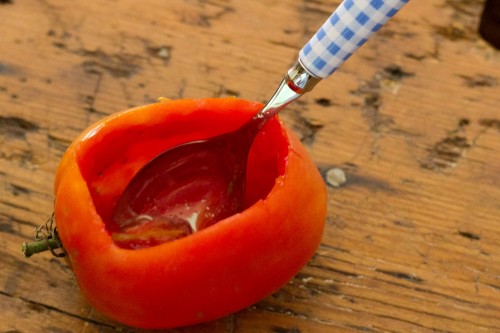 For the soup bowls, choose a really large tomato, preferably with thick walls and hollow it out with a spoon, being careful not to puncture the walls. You might plan on an extra just in case. You can do this while your soup is simmering and add the tomato innards to your soup pot. 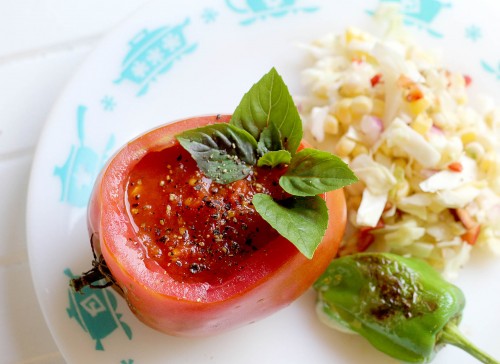 To serve, ladel soup into the tomato bowls and garnish with fresh basil. When you’re finished with your soup, you can put your salad into your tomato bowl! I have a fresh end of the garden chow-chow here. 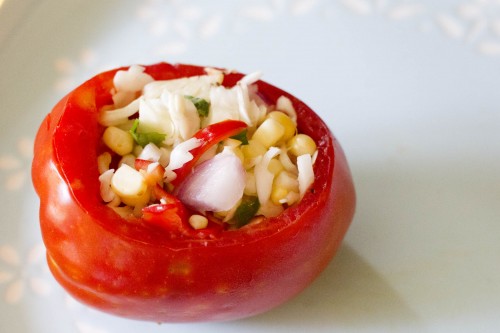 Cut the corn from the cobs, and measure it. Shell lima or butter beans, and allow of them about two thirds as much as you have corn. Put the cobs into hot water and boil them half an hour. Take them out about an hour before dinner and add the beans to the water. Boil slowly, half an hour, then add the corn. Just before dinner, drain off the water, and proceed as with ” Stewed Corn.” It is not necessary to boil the cobs first; but this heightens the flavor of the corn.