Welcome to more of How To Do Things Thursdays!  Today’s guest post is by our coal-dusted, blacksmithing daughter, Annie.

There’s nothing that makes me feel more at home than being immersed in the handmade. Knowing that one of my cooking students made that wooden spoon I’m stirring supper with, that a neighbor wove that throw rug I’m standing on. That my mother hand-stitched that quilt on our bed, and that my uncle forged those hooks hanging in my kitchen. My morning coffee is ground in an old-timey crank grinder that my grandfather built, and the person who made the mug is a family friend.

Making something for someone is a love language. People put something of themselves into their craft, their heart, their vision, their time. Likewise, buying handcrafted wares from artists also spreads the love, as it shows that we still value the time of skills and trades passed down through the generations, that we are willing to pay more for this than something with a ‘Made in China’ sticker on it.

I’ve always been something of a maker. I like using my hands and, well, making things. I like to cook over the fire, do sewing projects, paint cow portraits, make soap, make music. This is all well and good, but these things are mostly fleeting, as the meal gets eaten, the clothes get worn out, the soap gets used, and the music ends. That’s a good thing, as my life isn’t overflowing in ‘stuff’, but I have always had a desire to build something that lasts. Oh, how I’d love to build a bookcase, a picnic table, or to fix that broken chair. To forge hooks, ladles, and door latches. Alas, up until now I haven’t been able to muster up the courage to try, as I didn’t know how to start.

Blacksmithing has fascinated me for the past 4 years or so. I teach cooking classes regularly at the John C. Campbell Folk School in Brasstown, NC. It’s a maker’s paradise. In just about every building, everything possible is blacksmithed. The door latches, the hinges, the hooks, the towel racks, and so much more was forged in fire and beat with a hammer. I’m always awestruck by the utilitarian beauty of it. At first, it didn’t even occur to me that I could do this. Could a relatively small woman have enough strength to bend steel to my will? I hoped so, but wasn’t certain. 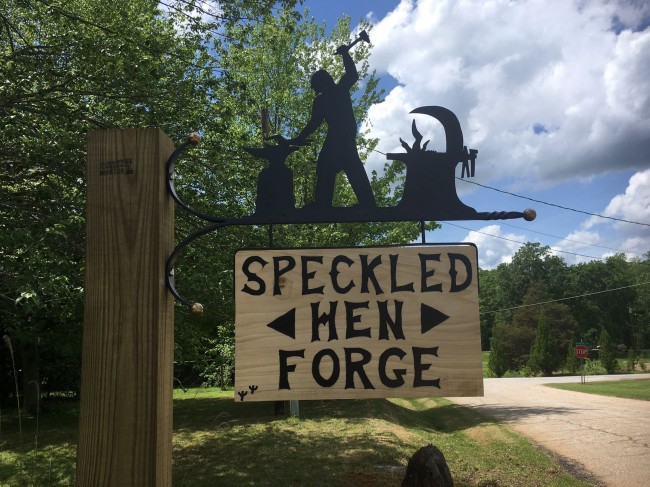 Luckily, I have an uncle who is a fabulous blacksmith, and he’s willing to teach me. Uncle Roger lives about an hour south of me, and runs Speckled Hen Forge (check out his stuff on Etsy!). He’s been telling me for ages that he would teach me, but I wasn’t able to get the nerve up until we decided to launch How To Do Things Thursday. Roger creates some truly beautiful work- everything from hooks, traditional knives, steampunk robot creations to forging a forge itself. He’s worked with metal most of his life and the man seems like he can build about anything with his hands. 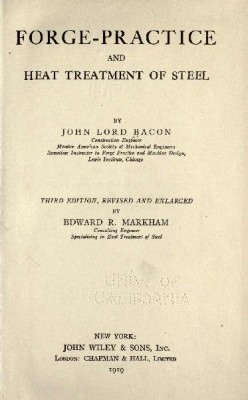 Blacksmithing isn’t in our 1919 ‘textbook’ but it sure was (and still is) an important skill around the small farm, even for backyard farmers like myself. But don’t worry- I found another 1919 text to use as a guide, ‘Forge-practice and heat treatment of steel’ by John Lord Bacon (what a name!). It can also be yours on Kindle for only $0.99, which is pretty cool.

For the past few weekends, I’ve been making the trek down to Speckled Hen Forge to start learning the art of blacksmithing. I wasn’t sure if I would like it as much as I hoped I would… but as luck would have it, I like it even more. I suppose that isn’t entirely surprising, given that I love using fire (I even have a fabulous 1930’s wood cookstove in my living room) and banging on things. I’m not particularly great at hammering, but I play vintage jazz on guitar and upright bass almost exclusively because I love instruments that I can hit. Playing guitar and wielding a hammer aren’t so different; precise, firm rhythmic strokes are needed. You have to react to the the dynamics of the music or the metal and adjust accordingly so that you don’t create mayhem.

Anyways. I love blacksmithing. I learned to manage the coal fire in the forge. 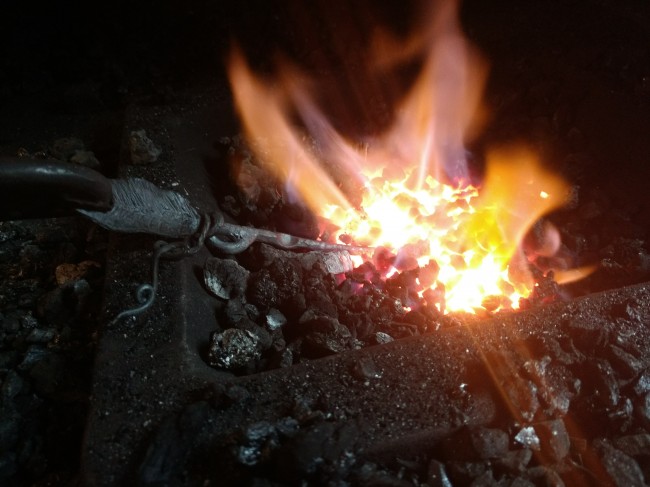 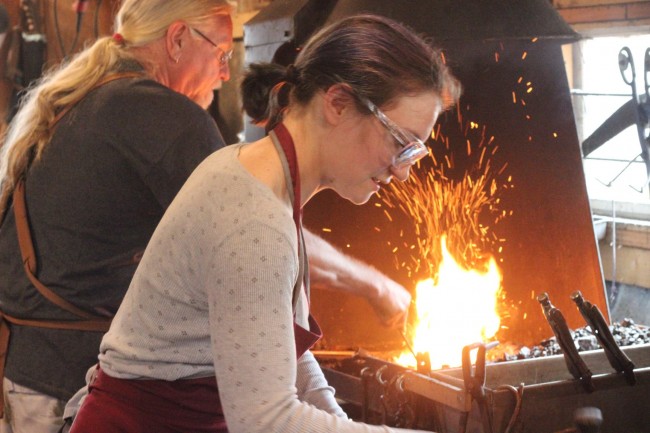 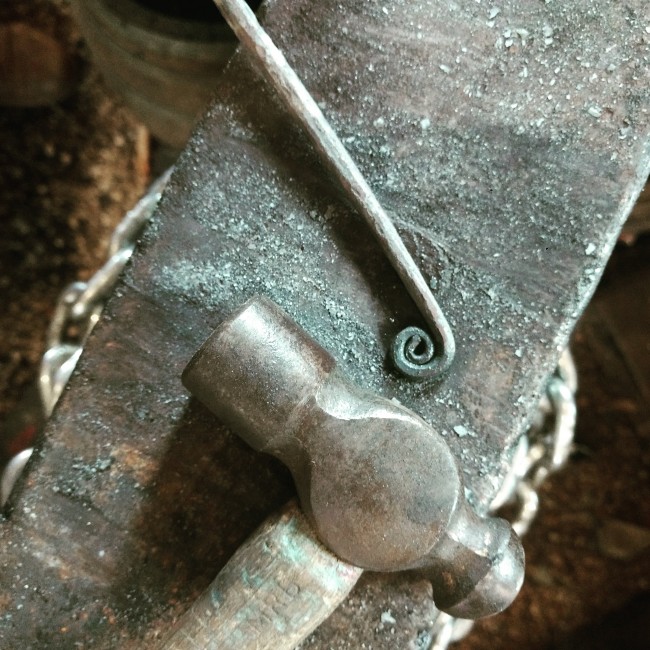 On day one, I managed to come out of the shop with these beauties (with much help from Uncle Roger): 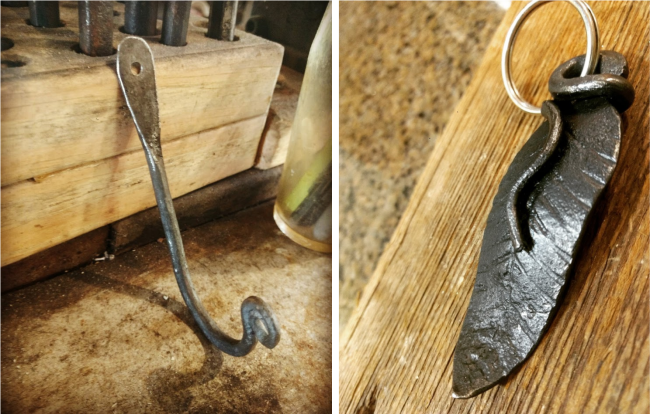 On day two, I upped my game with these hooks, which I did almost entirely with my own hands. I’m working on making five hooks that I’ll mount on a piece of old barnwood from my family’s old barn, and finally have something to hang my (handmade) coffee mugs on. 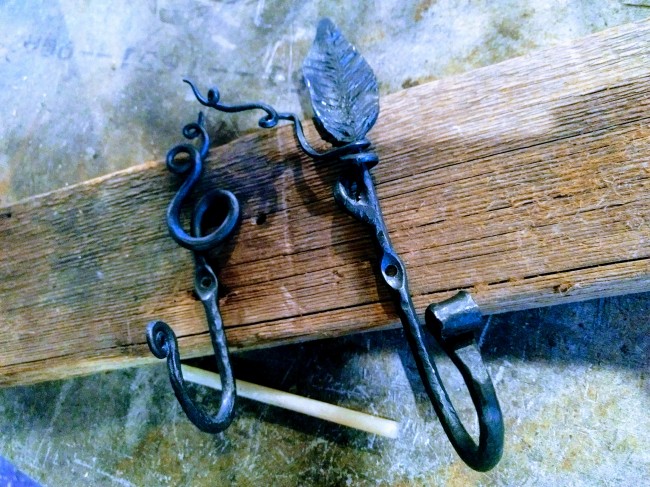 I simply can’t wait until I can go back down there and do more! I think it’ll take me a lifetime to make everything on ‘to-do’ list for my funky old house, but I’m ok with that. There’s something grounding and cathartic about working for hours on a single hook. I like not rushing, and I can’t imagine what could center a person in a more primordial way than steadily hammering steel by a coal fire with family. 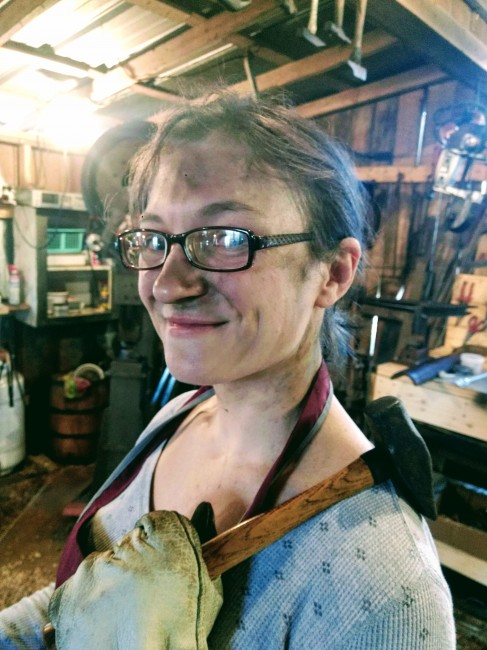