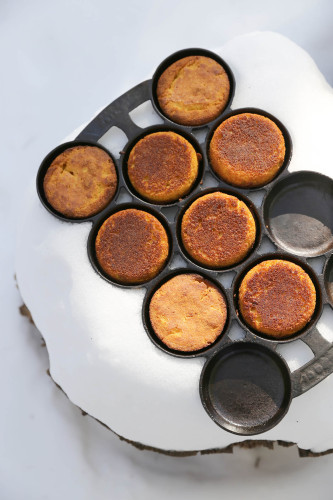 There’s about a one billionth of a percent chance that Asheville will see another snow event like last week’s anytime soon, but it is February, after all, and anything’s possible in these mountains. Just in case, I want you to be ready for a low-fuss wintery picnic with your adventurous friends next time you get a snow. 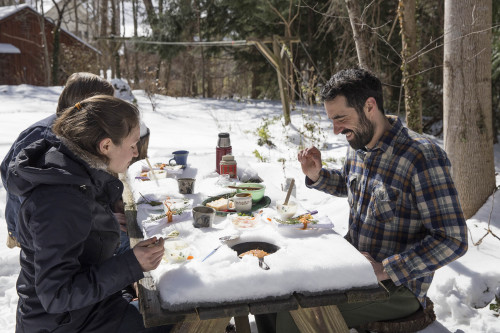 Last week, we were happily home-bound due to 10 inches of snow and a very long unplowed driveway … 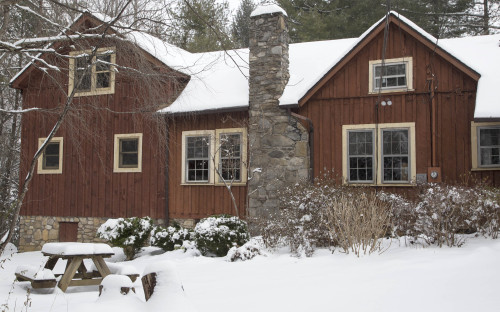 The snow-topped picnic table was just hollering “PARTY TIME!!!”, so party we did on a sort of a moment’s notice. I found the makins for 2%-milk-of-celery soup, which is a good soup, by the way, for  a thermos picnic because it pours so evenly. 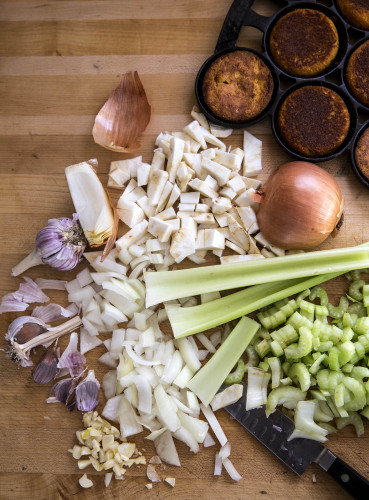 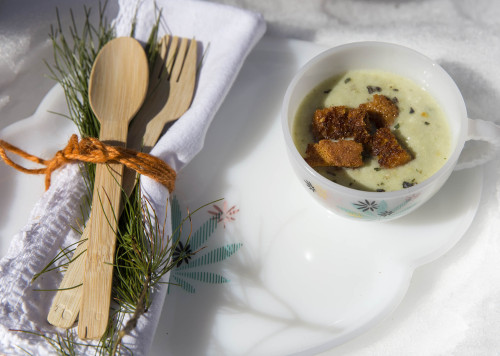 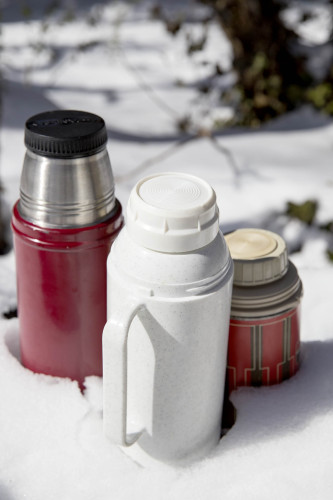 And then, since snow = cornbread here in the Appalachian mountains, I made my favorite cornbread recipe in my 1858 gem pan, pictured first photo. We need to talk about antique cast iron gem pans  and a completely lost American food tradition  soon, but for now, let me just say that the more cornbread batter snuggles up to a hot, buttered cast iron surface, the better it is. 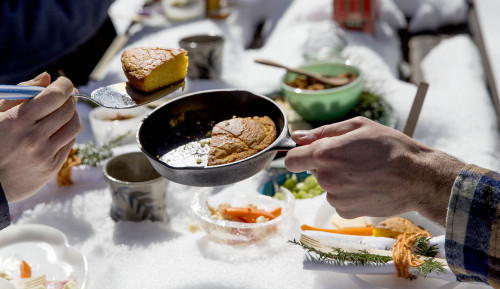 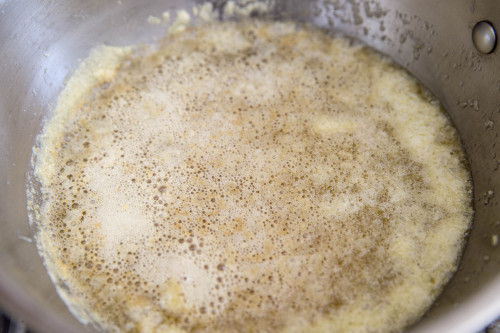 First you cook the butter in a pan on medium heat until it’s VERY lightly browned. On the third day of the waning moon, according to Italian Alpine farmers who live here, in Valle d’Aosta, Italy, who know what they’re talking about. 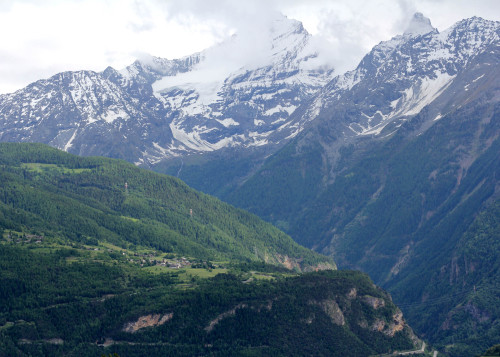 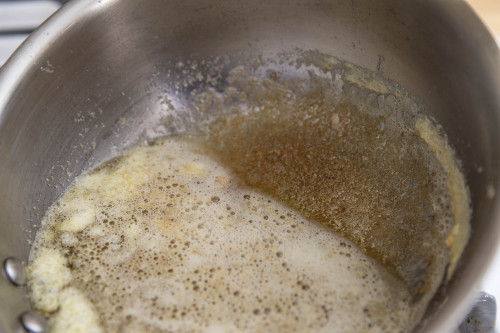 When the milk solids on the bottom are light brown, you skim off the foam and put it in a little jar. And you pour the clarified butter into another container. 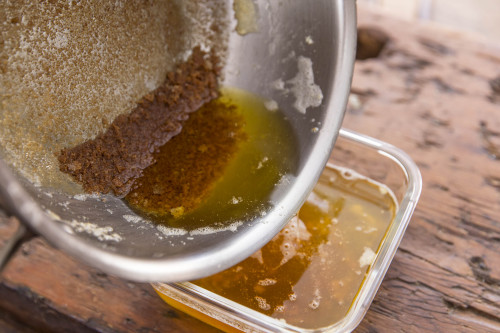 You add the crunchy brown butter cracklins to the foamy stuff you skimmed off. And you make a pie crust for a candy roaster pumpkin pie with the chilled brown butter …. 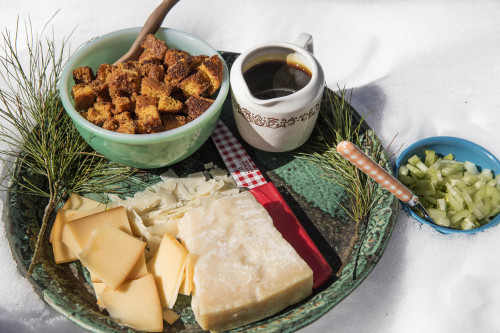 Back to the snow picnic. It would have been sensible to dust the snow off the picnic table and benches, but what fun is that? I threw a wool blanket over the snow on one bench for Wayne and Annie, and on the other bench, I found a stump slice of wood for Andy to sit on. And then there’s the ice bowl for the quick pickles. 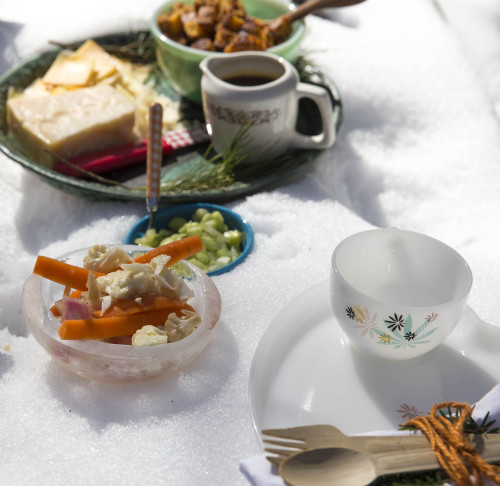 You need an ice bowl. Just fill a plastic container (not ceramic cause it will break, I did that) with a little water and put something like a glass measuring cup down inside it. Pop it in the freezer 2 hours. 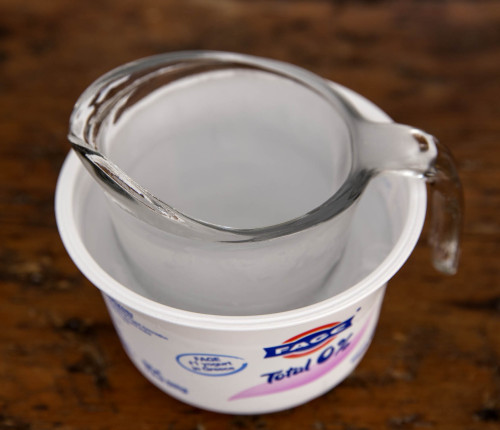 When frozen, pour warm water in the measuring cup to loosen, et voila! A little ice bowl. You can make a bigger version to house a tea candle for a beautiful wintery ice lantern. 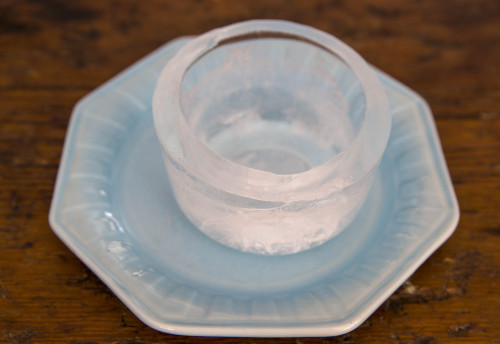 PS, Don’t tell anybody, but it was 50 degrees outside by the time I got around to crafting this picnic, and the snow was melting like crazy all over our knees, but we had a blast. 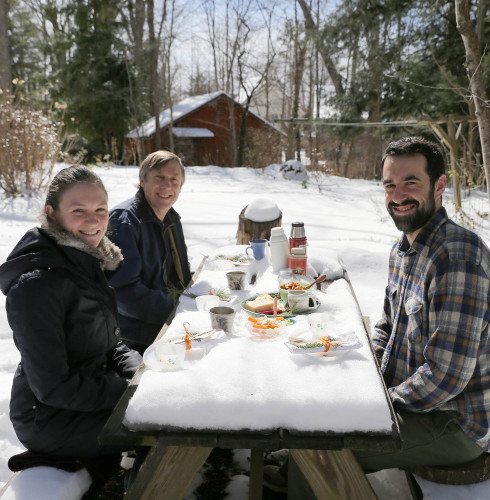