Welcome to How to do Things Thursdays!

If you were to walk into my kitchen in early November, what you would see is apples. The gnarly red ones that fall from the overgrown antique trees in our lives as well as about 80 pounds of magnificent GoldRush apples that I order annually from my apple-loving friend, Andrew. They are in the dehydrator being dried, simmering on the stovetop as apple butter, and in a slow oven en route to becoming sliceable apple walnut membrillo. And, yes always the apple pies.

Come February, the GoldRush apples are shrunken, withered glorious globes of concentrated apple heaven that need to be salvaged before going bad. Which is my current project. So probably much to the horror of  the writers of How to Do Things, 1919, I’m transforming them into a boozy apple pear mince pie filling. And I do mean boozy. 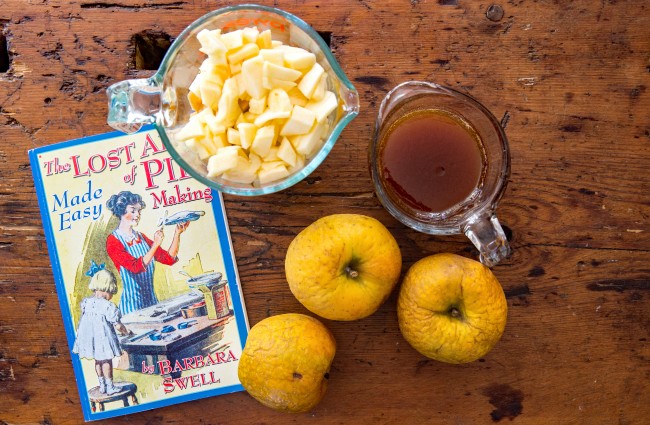 Our project starts with “boiled cider” which has been a thing on internet food sites for the last 10 years or so. But guess what? Cider syrup has been around for at least 100 years ever since the Dept. of Agriculture declared apple table syrup an amazing discovery and Farm Journal picked up the story in their How to do Things book. Woo hoo! Kinda cool actually for farmers who gained another way to make use of culled apples that would otherwise go to waste. The folks at the Farm Journal published their book in the midst of WWI sugar-rationing, so products like syrup and apple jelly made from boiled cider were especially appreciated. Additionally thrifty was their suggestion to add calcium carbonate to the cider which caused the malic acid in the juice to form filterable crystals that could then be sold at a whopping $2 a pound for medicinal purposes.

If you haven’t made cider syrup, oh, do so! It will change your life. Boiled down 7 or 8:1 or so, you can use the thickened syrup to sweeten apple pies, cheesecake, cabbage slaw, sweet potato casserole, gelato and pretty much anything. Don’t tell anyone, but I don’t much care for sweets. However, a bit of cider syrup does add a bit of mysterious complexity to foods that would otherwise be overpowered by more aggressive sweeteners. Like sugar for example (!) 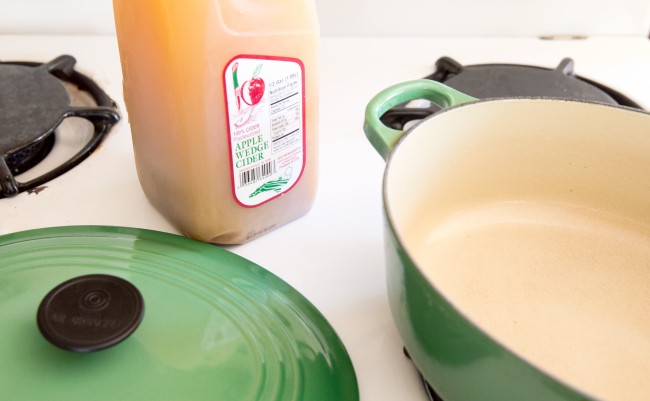 Find a half gallon of good (preferably local) apple cider and simmer it for about 45 minutes. Remove the scum as it appears. 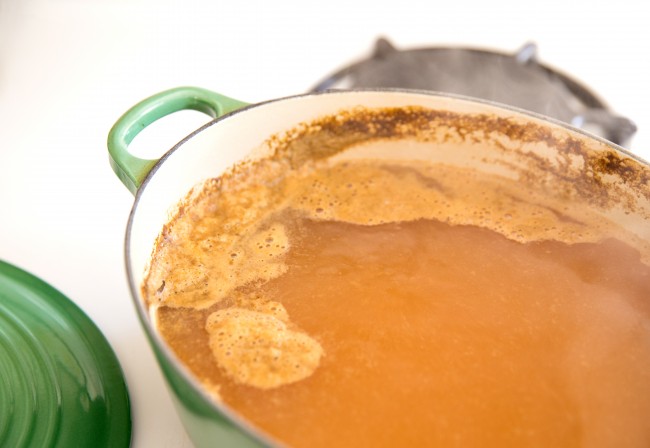 Boil the cider until it forms bubbles that cannot be stirred down. It goes from not ready to overdone quickly, so keep an eye out. 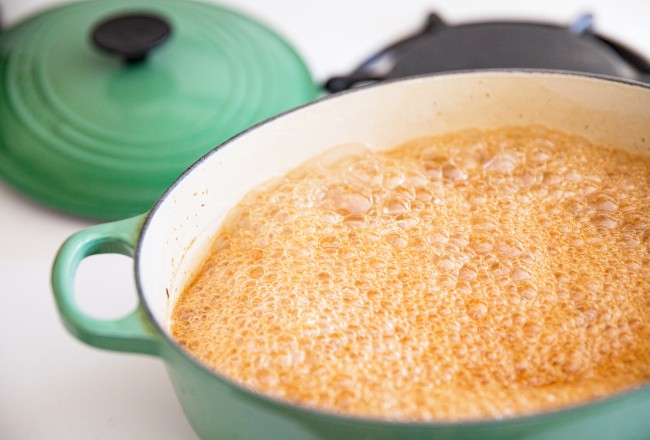 You’ll have about 1 cup of thick syrup which you can refrigerate, freeze, or water bath can to use all year. 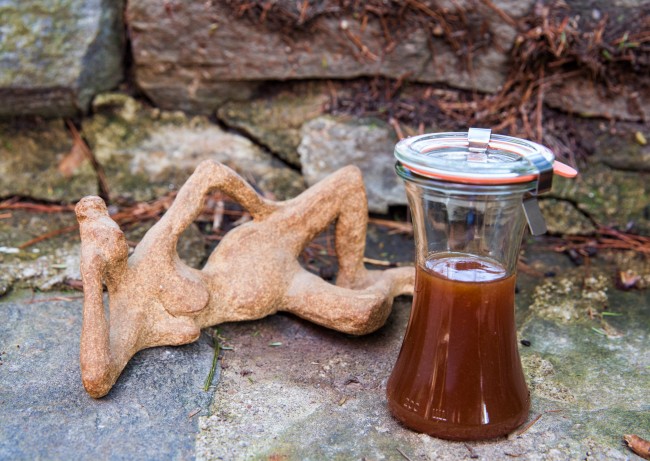 We’re going to use a bit of it make our boozy mince pie filling. By the way, did you know mincemeat pies have been around for a thousand or so years? Filled with the fruits, nutmeats and animal bits of fall and doused liberally with whiskey for preservation purposes, these pies were a 19th century hungry farmhand’s best friend.

To make the pie filling, you’ll combine all the finely chopped ingredients and cook about 30 minutes until there’s about this much juice left in the bottom of your pan. 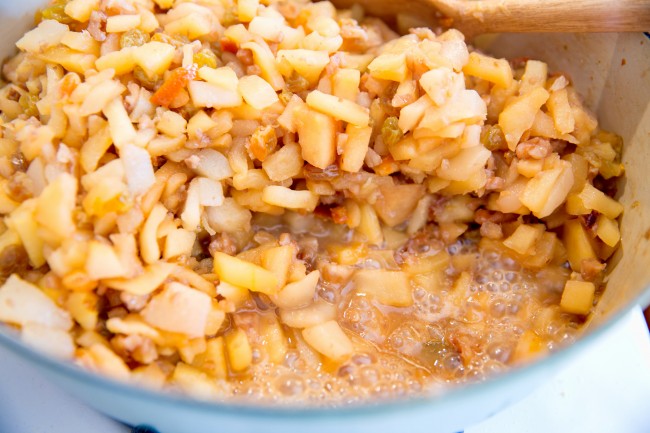 Once the apple/pear mince cools, you can use it for pie filling … I recommend a two crust pie with about 3 or maybe 4 cups filling. It’s powerful stuff. Or you can freeze for later in quart jars. 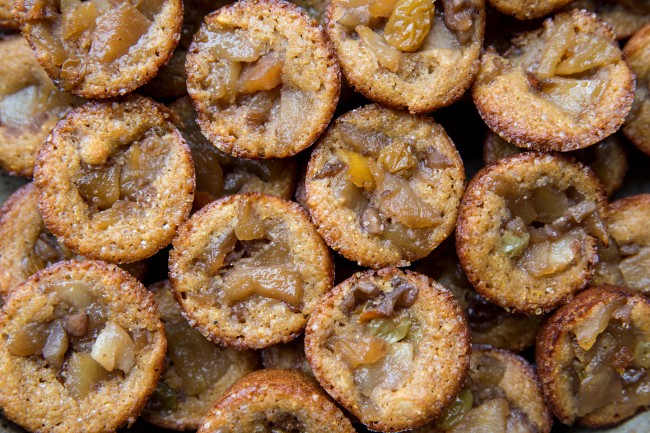 And speaking of vintage typewriter repair parties, that’s the subject for an upcoming how to do things post. Meanwhile up next week is my daughter, Annie, who will be guest-posting about learning to blacksmith. Stay tuned! 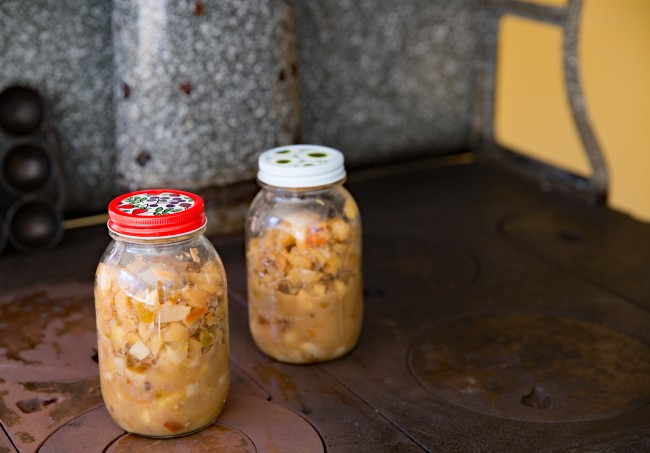