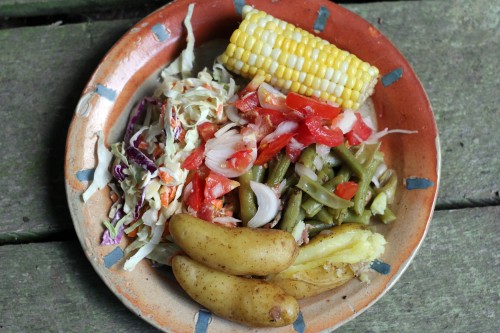 Down on coastal South Carolina they have a party-dish called Frogmore stew. I’m pretty sure it doesn’t have any frogs in it. Rather, it’s a big pot of steaming potatoes, corn on the cobb, smoked sausage chunks and shrimp topped with crab boil seasoning that’s dumped onto a paper-covered picnic table for your gobbling pleasure. Here in the mountains of Western NC, I’m serving up my Appalachian version of this one-pot wonder. It all starts with the bean. 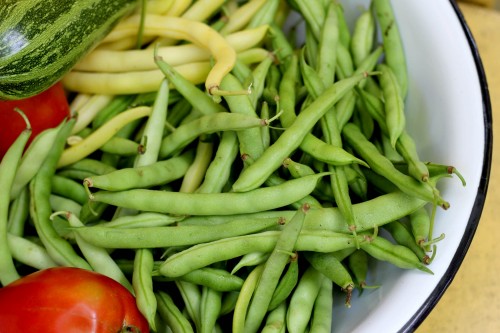 The counties surrounding Asheville are an heirloom string-bean mecca. For real. Just look at Bill Best’s bean catalog/bean bible if you don’t believe me. He’s been collecting our beans and their stories for years and he’s grown out 150 or more of them which he passes on in limited quanties. The variety I grow is one that I picked up at a seed swap about 10 years ago. The little package of 20 seeds came from Madison county, about 30 minutes North and they were simply called, “little old white potato patch beans”. I am not sure about the potato part because they’re a pole bean and generally they were grown up stalks of corn (hence the name cornfield bean), but they are fantastic. They’re short, tender, prolific and a delight to pluck off the vine. They’re a cut-short bean, meaning the big seeds are squished into the pod which makes them squared off looking. And they have strings. And as my grandmother Maudie said, “a bean’s not worth eating if it doesn’t have stings!” I concur. She grew half-runners and they’re easy to find if you don’t happen to live in string-bean mecca. If you do live in Western NC, look for a variety called “greasy cut shorts” available in July and August at farm stands and markets. Ok now for the fun part. Stringin’ … 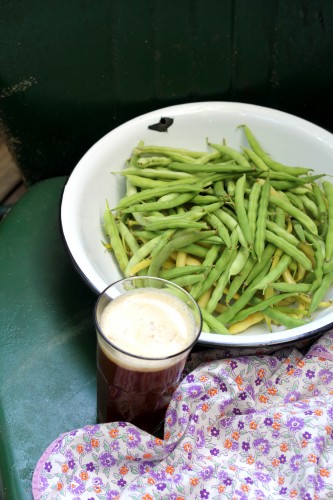 First grab a cold beer or ice tea and a 1940’s printed feedsack apron. Sit outside, mosquitos and all, on a green glider. Or rock steps are a good place to string. Or a stump. 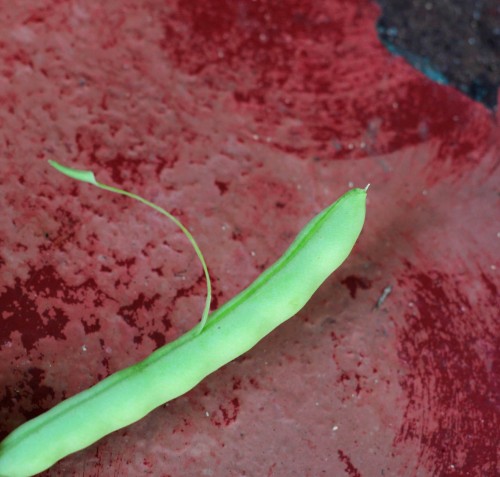 Hold the bean pointy end up. Grab the point and pull it down to the stem end, then grab the stem end and pull the string off the other side. Now snap your bean into about 4 or 5 pieces. DO NOT EVER, NEVER, cut your string beans with a knife! Heavens to Betsy, you will slice up the meaty bean inside and that is just plain awful. Sorry to scold, but sometimes you just have to stand your ground. Now to cook. First fry up a few slices of bacon in a cast iron pan (or saucepan). Then add your beans and cover with water. Simmer about 15 minutes, and see if the beans need any salt. Place whole small fresh-dug potatoes on top and cook 15 more minutes with the lid on. Now toss in some corn on the cob halves and cook another 5 minutes or so until everything’s done. Salt and pepper to taste. Don’t junk up the honest flavors of this summer garden “stew” with fancy schmancy seasonings.

Here’s a secret from Grandmother Maudie …. chop up your best meaty garden tomato along with a fresh summer onion. Put that on top of your beans in a big wide bowl. Serve the taters and corn along side with a spoonful of pot likker. Ok now, head back to your glider for a slice of this: 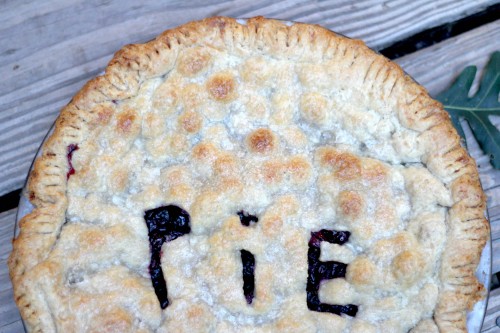